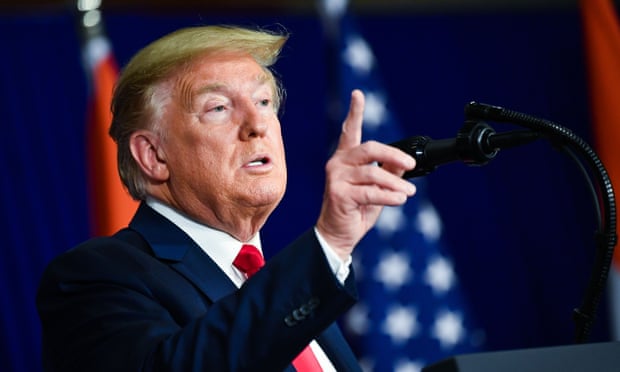 Photograph: Mandel Ngan/AFP via Getty Images
Donald Trump has taken the unusual step of attacking two supreme court justices on Twitter and in remarks to the press.


In a dissent last week, justice Sonia Sotomayor criticized the Trump administration’s frequent appeals to the supreme court to intervene in lower-court decisions, and the court’s willingness to side with such requests.

On Twitter, responding to a segment on Fox News’s The Ingraham Angle, Trump unleashed a tirade against Sotomayor and Ruth Bader Ginsburg, who has criticized the president in the past.

“This is a terrible thing to say,” Trump tweeted. “Trying to ‘shame’ some into voting her way? She never criticized Justice Ginsberg when she called me a ‘faker’. Both should recuse themselves on all Trump, or Trump related, matters!

“While ‘elections have consequences’” – a reference to his two supreme court appointments since winning the White House, both reliable conservatives – “I only ask for fairness, especially when it comes to decisions made by the United States supreme court!”

At a press conference in India on Tuesday, Trump repeated his complaint.

“I just don’t know how they can not recuse themselves from anything having to do with Trump or Trump-related,” he said. “The right thing to do is that.

“What Justice Sotomayor said … was really highly inappropriate and everybody agrees to that. Virtually everybody. I’ve seen papers on it, people cannot believe that she said it.”

He said: “She’s trying to shame people with perhaps a different view into voting her way.”

The attacks on two of the four women ever to serve on the supreme court, including its first Latina, landed as the lens tightens on the president’s interference in the courts system.

This month, attorney general William Barr publicly criticized Trump’s tweeting on justice department matters and reportedly said he was considering quitting after Trump failed to heed his warning to stop.

At the same time, more than 2,600 former US justice department officials called on Barr to step down for “doing the president’s personal bidding” in imposing a recommendation of a reduced sentence for Roger Stone, a longtime friend of the president.

It would be exceptional for any supreme court justice to recuse themselves from all cases involving the White House.

Sotomayor’s dissent was written in the style justices use after losing a divided ruling. It depicted accurately how the Trump administration has asked the supreme court to intervene in cases playing out in lower courts at a higher rate than George W Bush and Barack Obama combined.

Hantavirus | Similar Like Coronavirus, Hantavirus Panic China | What You Should Know

After country is being recovered from the deadliest outbreak of coronavirus, a new killer, "hantavirus" is found to be infecting people in China. acc ...

US Economy Today : Impact Of Coronavirus Invasion On US Economy