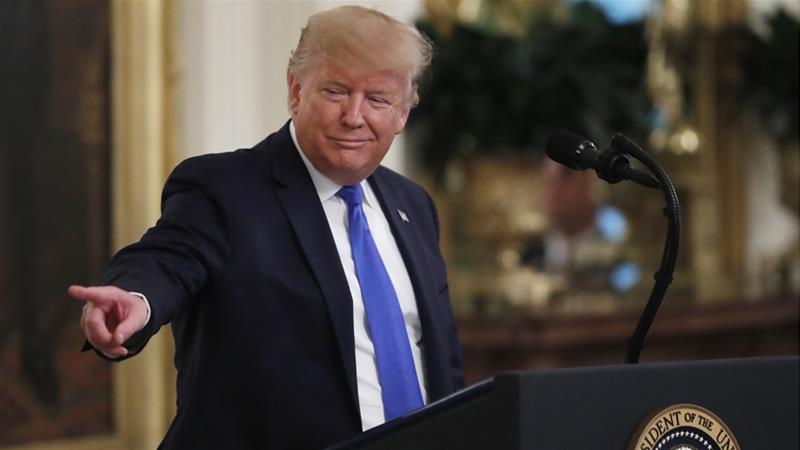 The White House declined an invitation to partake in the House impeachment inquiry. “House Democrats have wasted enough of America’s time with this charade,” wrote White House lawyer Pat Cipollone in a letter to the House Judiciary chairman. “You should end this inquiry now.”

On Monday, the Justice Department asked the Supreme Court to allow the federal government to carry out four scheduled executions by reinstating the federal death penalty after a 16-year old.

The Supreme Court just rejected the request — which means there won’t be an execution on Monday.

More context from The AP:

Attorney General William Barr announced during the summer that federal executions would resume using a single drug, pentobarbital, to put inmates to death. U.S. District Judge Tanya Chutkan in Washington, D.C., temporarily halted the executions after some of the chosen inmates challenged the new execution procedures in court. Chutkan ruled that the procedure approved by Barr likely violates the Federal Death Penalty Act.

The federal appeals court in Washington had earlier denied the administration’s emergency plea to put Chutkan’s ruling on hold and allow the executions to proceed.

Federal executions are likely to remain on hold at least for several months, while the appeals court in Washington undertakes a full review of Chutkan’s ruling.

The Supreme Court rejected the Trump administration’s request to restart federal executions on Monday and granted Trump’s request for a temporary delay in the enforcement of a subpoena for his financial records.

The Supreme Court has granted Donald Trump’s request to block a congressional subpoena for his financial records from Deutsche Bank. Justice Ruth Bader Ginsberg delayed an appellate court’s decision ordering Deutsche Bank and Capitol One to comply with subpoenas until 5pm on Friday, Dec. 13, giving the court considers granting an even longer delay and Trump’s lawyers time to prepare a formal appeal.

Trump has gone to great lengths to keep his financial records private. In a separate case, he’s appealing to prevent the House Oversight Committee from obtaining financial records from his longtime accounting firm Mazars.